“Cheer up sleepy Jean, oh what can it mean for a daydream believer?” Daydream Believer, words and music by John Stewart, originally recorded and performed by The Monkees.

The New York Times Magazine recently featured a tale ripped from the comic books of my youth. The story involved mystery, intrigue, villainy, betrayal, desperate living, a fortune won and lost. And what rip-roaring saga would be complete without a trademark dispute?

At the center of this story are “Sea Monkeys,” the amazing critters advertised in the pages of Batman, Superman, and Archie comics. If you’re not of a certain age and don’t know what I’m talking about, here is a vintage ad for the “Monkeys of the Sea:” 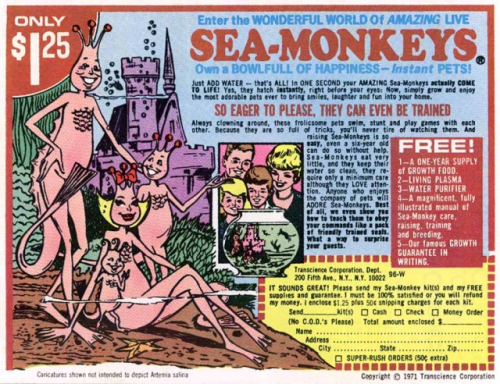 Generations of kids flirted with the notion of ordering Sea Monkeys. But that was before e-commerce, when it actually took effort to clip the coupon, address an envelope, and go to the Post Office for postage.  It was easier to just turn the page.

The few of us who actually grubbed up the $1.25 purchase price were sorely disappointed.  You see, “Sea Monkeys” is a misnomer. While they come from ocean waters, (and still do today) there’s no sapien at all in these critters. They’re just freeze-dried brine shrimp. Like Folger’s Crystals, they can be re-animated—brought to life—merely by adding water.  Some managed to keep their Monkey colonies alive for weeks, month, or even years. But most saw them die within days, the novelty lasting only hours before boredom and neglect set in.

Sea Monkeys are the brainchild of the late Harold von Braunhut, who died in 2003. Dubbed a “Mad Genius” in a 2011 article by Evan Hughes, Von Braunhut’s inventive genius did not end with Sea Monkeys. He’s also the guy behind X-Ray Specs, another comic book staple that promised to give the wearer the power to see through buildings, clothing—even their own skin.  Who wouldn’t want a pair? 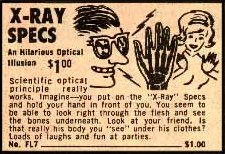 Say what you will about the merits of Mr. von B’s technical acumen, he knew his audience—gullible kids with time on their hands, fertile imaginations, and spare change to spare. He amassed quite an empire.

And that’s where trademarks come in. When he died, his widow struck a deal with a toy company with a name—Big Time Toys—that sounded more like a cartoon enterprise (think Wiley Coyote’s ACME)  than a real-world business.  According to a lawsuit filed by the widow von B, she merely licensed Big Time to distribute Sea Monkeys.

The Big Time bigwigs see things differently. They claim that the money they’ve paid over the years was part of an installment plan to buy the Sea Monkeys trademark outright. Now, they claim, they rule the Sea Monkey jungle, leaving Mr. von   Braunhut’s widow out in the cold—literally.  Like Big and Little Edie Beale,  (Jackie Kennedy Onassis’s kin  who lived in squalor in their Long Island mansion),  Mrs. von B orchestrates her Big Time  trademark  battle while huddled up in a crumbling Maryland estate on the shores of the Potomac river, with only a wood fire for heat.  Like a good comic book plotline, this one has been going on for years.  And there’s more than spare change at stake.  One report estimates Big Time’s annual revenues from Sea Monkeys at over $3 million. And of course, there’s the classic theme of good versus evil, David versus Goliath, with the Sea Monkeys trademark as the widow von B’s slingshot.  But like all good things, Sea Monkeys magic is not eternal. Now, they come from China. And old time fans complain that the Chinese variety don’t have the same spunk as the original formula.  Hey, there’s a potential new slogan for the 2016 Presidential campaign—Make Sea Monkeys Great Again.

QUOTE OF THE DAY: “Monkeys are superior to [humans] in this: when a monkey looks into a mirror, he sees a monkey.”  Malcolm de Chazal