Another Fine Mess: Stanley Cup Kicks Off In Lockout’s Shadow

“Now ever since I was young its been my dream. That I might drive the Zamboni machine.”  The Zamboni Song by The Gear Daddies. 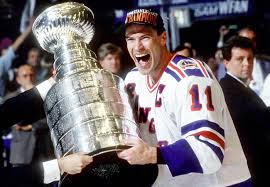 One of the most exciting and intensely played tournaments in all of sport—and the one with the oldest and most coveted trophy– kicked off last night as the NHL’s Stanley Cup Playoffs got underway.  The contest pits 16 teams who compete in best-of-seven elimination series, with the winners of each round moving on until only two teams remain to face off in the Stanley Cup Finals in June.  My team, the New York Rangers, clawed its way into the playoffs on the strength of shrewd trades, gritty play, clutch scoring, hot goaltending, and a few lucky caroms of the boards.  They will play the team from my adopted home, the Washington Capitals, with Game One scheduled for tomorrow night at Verizon Center.  That arena is  located in DC’s vibrant Penn Quarter, only a stone’s throw away from the city’s dwindling Chinatown.  (I’m still investigating rumors that some visiting players have ordered carry out for between-period noshing).  If past is prologue, it should be a riveting series.  Last season, the Rangers ousted the Caps in seven games.  But Washington scoring star Alex Ovechkin has been scorching opponents, and the Capitals seem destined to skate past the disappointment that has hounded these perennial under achievers like a dogged forechecker.

For a time, however, it seemed doubtful that NHL hockey would be played this season in the arenas of North America.  The contract between the league and its players had expired, and the owners had locked the players out.  No training camp, no pre-season, no games in October, November, December, and into January.  As talks between the factions grew evermore fractious, the league cancelled its mid-season outdoor showcase, The Winter Classic, and gloom descended on the hockey faithful everywhere–from the “Original Six” bastions of NHL tradition (Montreal, Toronto, Boston, New York, Detroit, and Chicago) to the glitzy, frozen showtime of L.A.’s Staple Center, home of the reigning champion Kings.  The issues separating owners and players echoed the tropes we’ve become accustomed to hearing whenever owners, players, and their respective minions drop the gloves and square off for a labor brawl.  Cries of poverty from billionaire owners collide with the players’ refusal to backslide on gains and perks won in years past.

“We had all been here before”, as CSNY sing in Deja Vu.  And the flashback wasn’t pleasant.  Back in 2004-05, an entire season was lost due to labor strife.  And as the New Year’s ball descended on Times Square to welcome the infant 2013, the odds of salvaging the 2012-13 season seemed longer than Father Time’s beard.  Frtunately–for the owners, players, the fans, the broadcasters, and especially all the hardworking  folks whose livelihoods depend on the games being played–common sense prevailed and a new collective bargaining agreement was inked on January 9, 2013.

By that time,  the League had cancelled over 500 games and only enough time for a 48-game season remained.  The short season felt like a long time coming, but when it arrived, it was fast, furious, and fun.  Cramming 48 games into four months meant more games per week per team, and less rest for the players.  And once play started, it seemed that the turmoil from the lockout was soon forgotten.

But this blog is about IP rights, not sports, so let’s consider whether the casualties from the long labor dispute included more than  lost games and revenue.

Did the lockout hurt the NHL brand?  It appears that it may well have done more damage than forcing fans to fill their sporting void with episodes of Duck Dynasty or Jersey Shore.  According to a study released back in February,  the lockout not only left  hockey fans feeling slighted by the NHL, it also pulled down the League’s overall brand value. Consultancy firm Brand Finance, which tracks the clout of brand names in the real world, estimated that the NHL will lose nearly US$328.2 million in brand value in 2013 as fans spend less money on hockey in the coming year.

Another study, from Toronto-based firm Charlton Strategic Research Inc.,  found that while the NHL’s image has improved since the lockout ended,  it has  not recovered fully.

In remains to be seen whether an exciting “second season” of playoff hockey will provide the antidote for the lockout’s hangover.  Perhaps if a marquee team from a major media hockey market like New York, Boston or Chicago hoists Lord Stanley’s Cup in June, the lingering effects of labor strife will melt away like ice really should on the verge of the vernal equinox.